Tallinn, the Capital City of Estonia is surely unique! Not only because its old town was recognized as world heritage by UNESCO, but because it is truly like no city that we have ever visited before. It manages to mix and mingle everything; and that can be perceived in every single bit of its culture, architecture and even its food!

The City is a charming reflection of its own history, which can be observed in its multiple medieval churches, baroque palaces, modern skyscrapers, and even its cuisine.

We began by walking to the Town Hall Square, which is a must visit for every tourist! And also, a great place to begin your journey at!

We immediately got the medieval grasp of Tallinn, it was fascinating to be immersed in history!! Crusaders, medieval lords, and even pieces of its Soviet history could be observed on our walk. 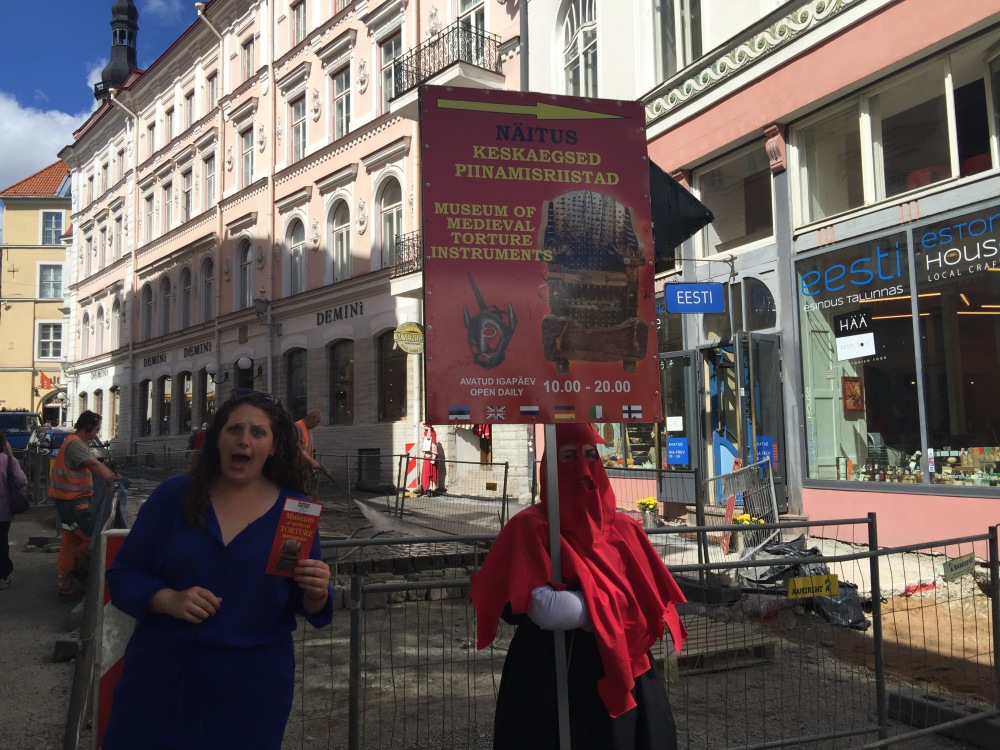 We were completely fascinated by the city! And we had just gotten to see its Town Hall Square! But that had already made a huge positive impact on us! Even Jack was fascinated and was interested in knowing more about Tallinn’s loooong and far back history!

After shooting thousands of pictures like if we were professional photographers, because every corner of Tallinn was really breathtaking, we decided to keep our walk.

We continued our journey through the Raekoja Plats, a street which we loved because it had Tallinn’s  history written on the ground, like a time line! 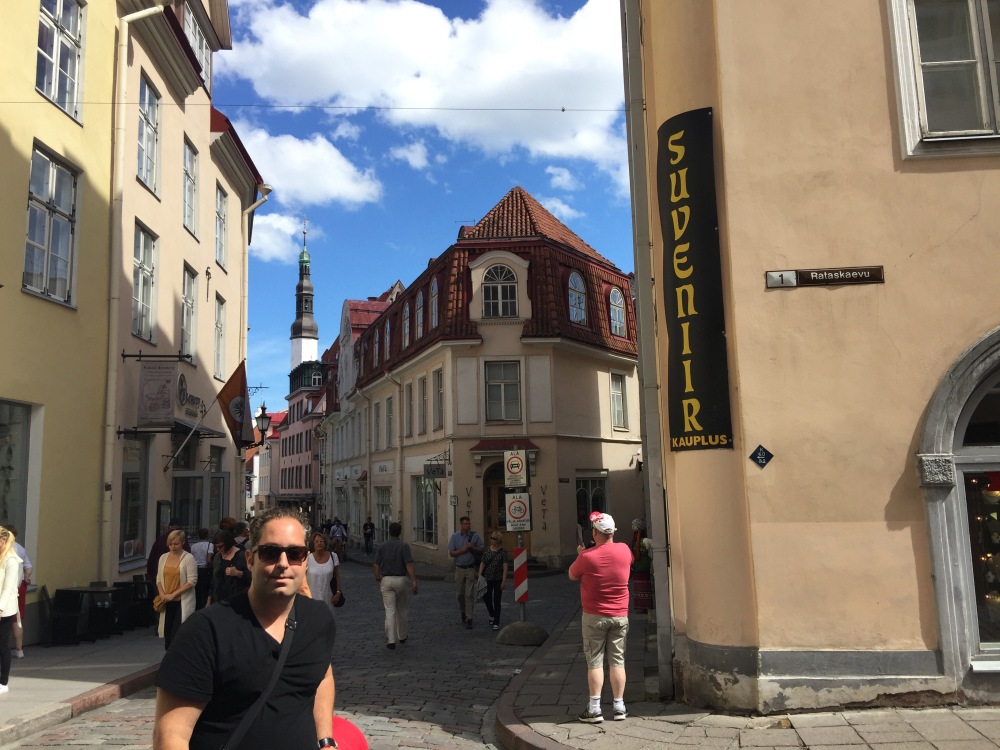 We walked through there in order to reach the “roof-tops”, which are two pictoric streets located above the city, from which one can appreciate magnificent views from two different sides: the Old Town from Patkuli, and the new and modern Tallinn from Kohtu Street. It is a steep hill with many stairs but it is worth the effort!!! It is not to be missed!

Close by, there is the Toompea Palace, which is according to legend built on such heights because it was used by nobles to look down on the inhabitants and lower classes, both literally and on a figurative way. 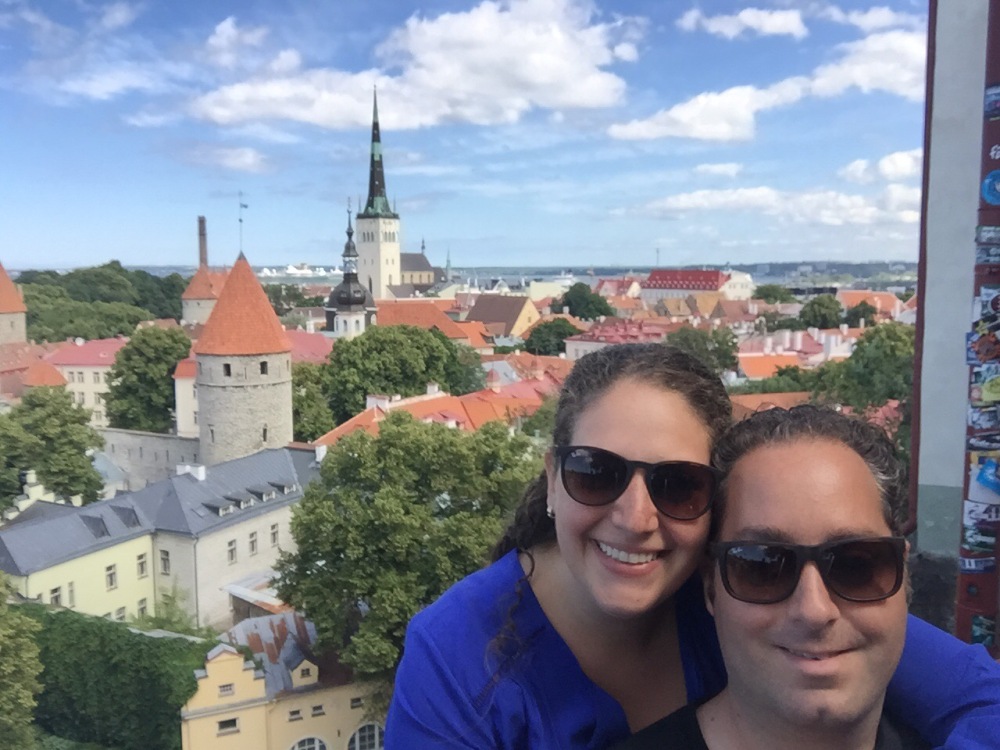 The views were stunning! Tallinn is truly unique! A must to everyone that is willing to experience something truly different!

There were nuts stands all over, they came in different flavors and we were tempted to try them, we loved the chili and dill ones… 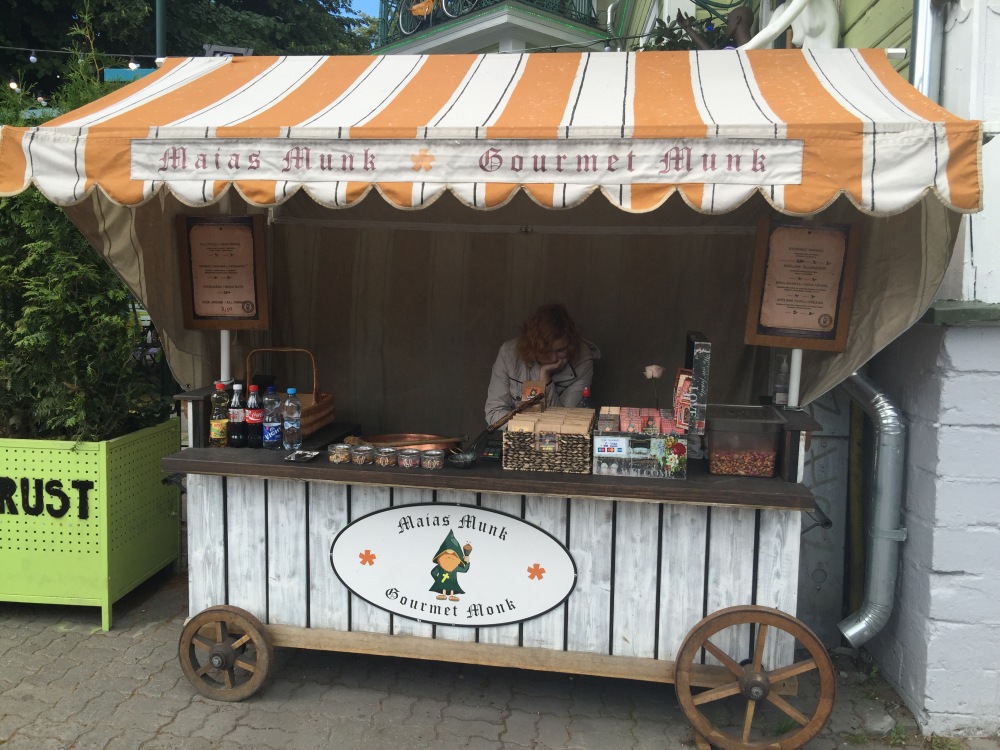 After that, we passed by an amazingly beautiful Church, the Saint Alexander Nevaky, a legacy of its Russian history! 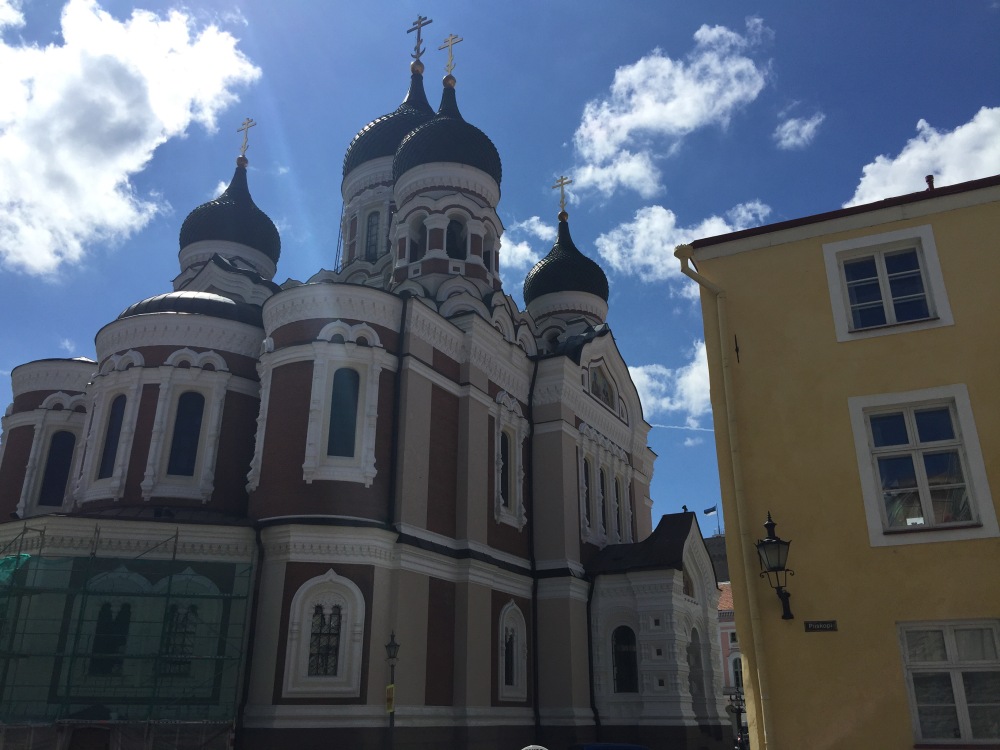 After getting the Tallinn vibe and being completely exhilarated by its uniqueness, we decided to top the experience off with extreme! We entered a restaurant called Old Hansa, which really makes you feel like you are back in history! It is all decorated like in the medieval times, waiters are dressed up and the food is served in funny plates with wooden forks. The experience was totally worth it! When we started to look at the menu we encountered what for us was weird food, simply because we are not used to it… 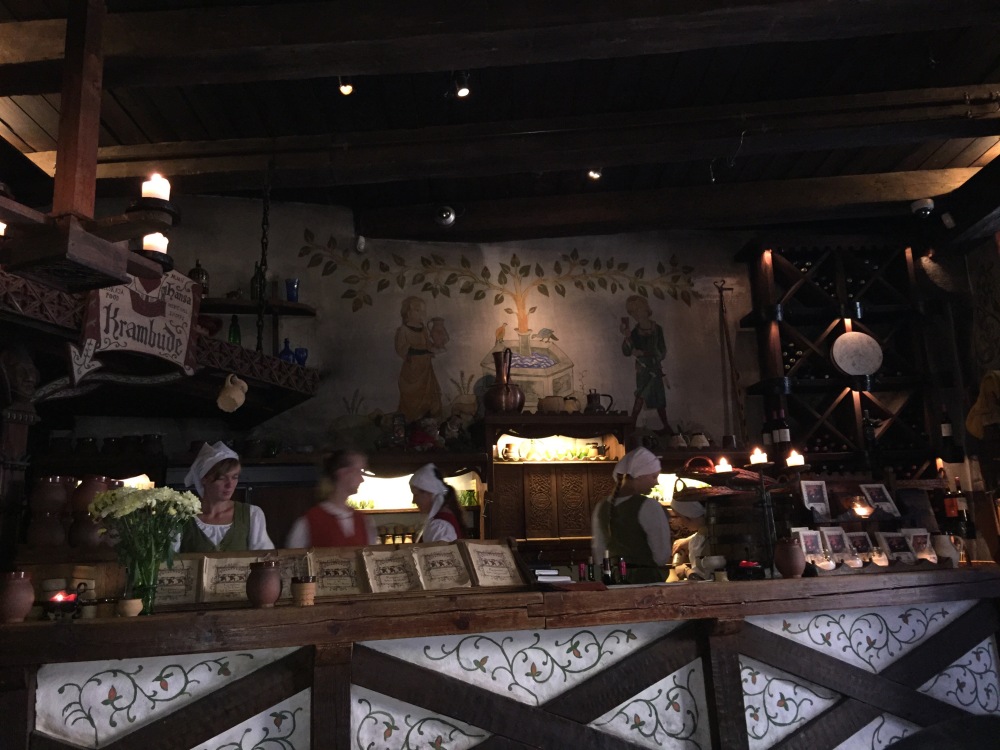 The house specials included boar- which is kind of like Pumba from the Lion King ha ha- elk- kind of like a reindeer- and bear- yes, resembling that of your infancy…

We were not really brave enough to to try those, and decided to stick to the “classics”… So Jack had Salmon, Beca had a delicious wild mushrooms soup and Jaime went vegan… Ha ha, which is complete odd because Jaime loves meat!!! Or better said, beef.

It was a bittersweet experience! Our stomachs turned when reading about the “unique” dishes and we lost appetite, but when we tasted the soup, it all changed! It was so delicious! It was rich and creamy and just to die for ! The best mushroom soup that we have ever had ! As for Jack’s salmon he devoured it! But the fantastic thing about his dish, which contained side dishes pretty similar to those in the vegetarian plate, was that it was a mix of textures and flavors! They made spicy lentils, sweet barley with nuts, a pastry filled with potatoes, a very unique sweetkrout, delicious pickles, and potatoes cooked in a sweet and savory way. It really was an extraordinary experience! The mix of sweet and spicy and it’s excellent flavors made every piece of Tallinn stick together and that added it’s different and unique taste to the visit! We finally sweetened things up with a delicious dessert which was baked for 15 minutes and it was pieces of pastries topped with apples and on the side a natural honey sauce with sliced almonds and cinammon. It was exquisite! A true gift from Estonian cuisine!

Before concluding our visit there, we couldn’t miss the canned boar, elk, bear and which were sold at the souvenirs shops… Perhaps for next time! 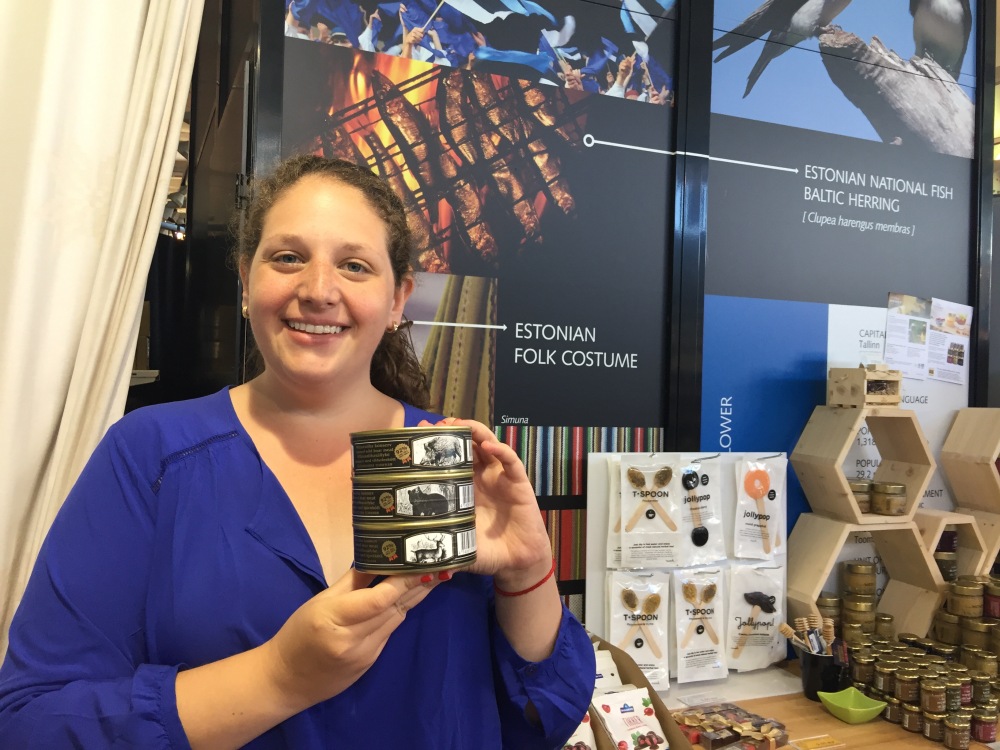 The experience was magnificent! For sure Tallinn has a charm that we have never found elsewhere, it is unique ok it’s one way and has its own style! A must visit at least once in a lifetime!